With the 1st October – and the launch of Tomb Raider: The Dark Angel Symphony on Kickstarter – fast approaching, we sat down with composer Peter Connelly to discuss the project in a little more detail.

Hi Peter, and thanks for giving up your time for this interview.

This is something I’ve wanted to do for such a long time but never really knew how best to go about it, not forgetting the permissions required from Square Enix (I don’t own any rights to the music). The motivation came from various sources; I was constantly asked if I had plans to release an official CD of my music. At that point it had skimmed my mind, but when social media became a big thing, it became clear that there is actually a demand for this.

What aspects of your music are you looking forward to revisiting the most and why?

I want to be fully involved from start to finish; with AOD it was mostly left with our Orchestrator while we cracked on with other sections of the project and, looking back (pun intended), there were things that were overlooked or didn’t quite hit the mark of expectations. Then are the TR4/5 OST’s which were done completely on synthesisers and samplers… Oh, and TR Chronicles’ Main Theme WILL be finished 😀

We REALLY want to hear what Connelly wanted to produce for TR5’s full theme!

What new techniques/instruments/etc., are you hoping to utilise?

With regards to new techniques, this, to me, is more a case of the people we want to utilise. I am getting to work with my favourite arranger of all time, Richard Niles. Along with what we learned when writing AOD’s soundtrack, we will be in an amazing position to be able to translate what we liked, what we didn’t like, what needs to change, etc.; if anyone can translate my ideas over to music, Richard can. Instruments wise, I would like to use as many exotic instruments as needed; this is something I’ll need to discuss with Richard once the Kickstarter is a success.

What can you tell us about your other team members? Can we expect some famous names to crop up?

Absolutely. Richard Niles is someone I’ve wanted to work with since around 1988 – thirty years later, here I am!

We asked what other names are yet to be announced, but Peter just smiled…

What can you tell us about the formats you’re hoping to release the album in?

All the usual formats will be available, right from a basic Download and CD to Vinyl, 5.1 Surround DVD, and the full Music Score. 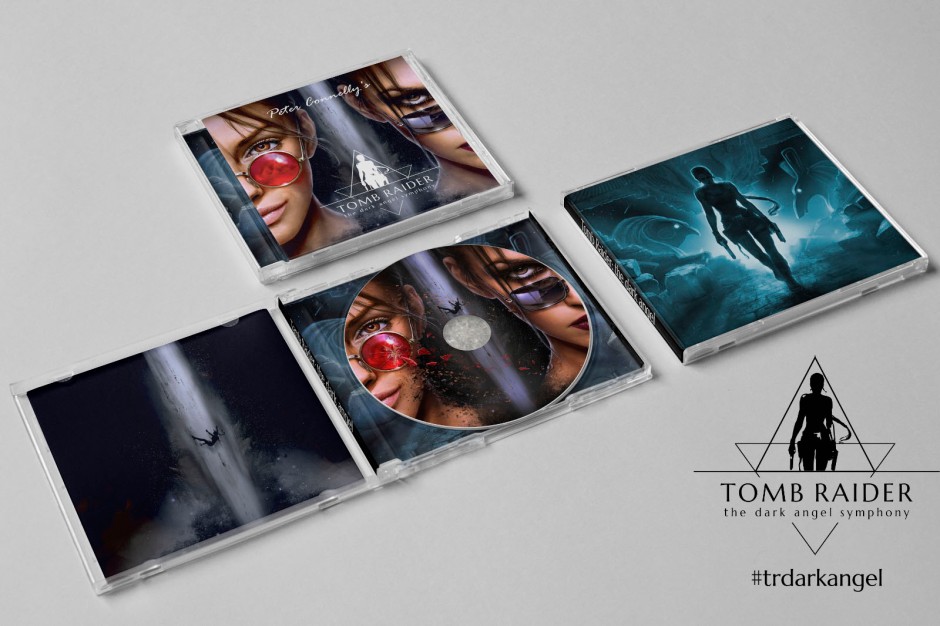 A mock-up of the final album cover art and insert. Artwork by Inna Vjuzhanina. Graphic design by Lara Titova.

These Kickstarter campaigns usually have additional pledge rewards on top of the physical or digital product. What can you tell us about them?

Several of the rewards have already been revealed (please visit https://www.facebook.com/trdarkangel for more information and updates regarding reveals), but… Let’s just say there’s more to come 😉

Looking back now, how does it feel to see so many people still loving the soundtracks and sharing their memories 20+ years later?

I am still humbled and overwhelmed that, after such a long time, they are still being loved, liked, hated, played, etc. When I first wrote them, it was a day job; I did what I had to, I got paid, I lived… I never thought for one minute that, even after one year, they would be remembered. It’s amazing that we are where we are twenty years on and, for that, I’m forever grateful.

You were brought on as full composer for Last Revelation, having already done audio work for TR3. How did this promotion come about, and how did you feel about the opportunity to work on a full Tomb Raider musical score?

I wrote a Boss Theme for TR3; when I was playing it, testing before release, the very last boss level seemed underwhelmingly quiet. So, I just got off my ass and wrote some music specifically for that. Unfortunately, it was written too late, so it didn’t make the build; but I didn’t want to waste it, so it got recycled for TR4 (albeit a slightly different version). It was the music I wrote for Herdy Gerdy that helped Jeremy Heath-Smith decide he wanted me to score the next Tomb Raider. I’ll be honest and tell you that I had never felt so happy and so scared, both at the same time. It’s TOMB RAIDER; it’s a HUGE IP to be part of… everyone’s eyes (and ears) will be on ME… But the buzz and excitement certainly helped open the creative floodgates!

Get ready for some serious nostalgia – with a twist

What was your proudest moment/favourite track(s) back when you composed this music back in your Core Design days?

Probably the Main Theme to Herdy Gerdy. It was the first thing I did during my first week at Core Design in 1998, so I wanted to make an impression. The actual theme was intended as a collage of ideas, but it ended up being the main theme.

Can you tell us anything about music that didn’t make it into Last Revelation, Chronicles, and AOD?

I kinda just worked on the fly and wrote what I felt was appropriate at the time; I never planned and said, “this must have 25 tracks, here, there, wherever…” Saying that, I did start to write the TR5 theme and never finished it, purely because I put it to one side so I could crack on with other stuff (I did EVERYTHING in TR5) and, by the time I came back to it, there was still so much to do that I had no time whatsoever to finish it off. I was working ridiculous hours/days at that point, right up until release and beyond (we had Localise versions to sort).

What was it like working with the London Symphony Orchestra for AOD back in the day, can you give us a little window into those times?

Apart from my children being born, it was the best day of my life. I was on such a buzz that most of the day seems like a dream. The biggest memories are hearing the LSO musicians come in, set up and have a little play with some of the parts as they were settling in and tuning up was surreal… I remember actually going into the studio during a recording of the Main Theme (the one we actually hear in the game) and thinking WOW, it doesn’t get any better than this! Hearing it live in this way is a million times different to hearing it on CD or in the game.

Jill de Jong (official Lara Croft model) attends the LSO recording of The Angel of Darkness in 2002. Jill is confirmed to be returning for the recordings of Tomb Raider: The Dark Angel Symphony!

As you know, a lot of people love the music used for Le Serpent Rouge, and now people are asking for a full orchestral version of it. Are you down for the challenge?

I didn’t plan on doing an orchestral version of it but… what the heck, hell yeah! Challenge accepted 😀

In your opinion, what do you think is the magic that has kept Tomb Raider around this long in the public eye?

Lara is such an inspirational character and has all of the attributes of true heroine. She has a bit of everyone in her so everyone can relate to her… or maybe it was the music? Haha!

We all know the bittersweetness behind the final Core Design games, especially AOD, but their legacy – and their music – is still adored by fans: if you could say anything to these fans, what would it be?

Core’s demise had nothing to do with the people working at Core or on AOD. It was purely a financial call and, had that financial call not been made, AOD probably wouldn’t exist at all these days because, had AOD not been released when it was, Eidos was potentially going to go bankrupt. This is why, after AOD, there were a lot of buyouts and change of hands. That being said, I’m overwhelmed by the love fans still have for the game and the music especially. I still get comments like “AOD still gives me goosebumps when I hear it”. I’m so grateful and humbled by fans support and love even after all this time.

Peter, thanks so much for taking the time to chat with us. And best of luck with the Kickstarter!

The Tomb Raider: The Dark Angel Symphony Kickstarter campaign launches on 1st October. You can follow their social media feeds and keep up to date via their newsletter. There are lots more revelations and surprises to come, so stay tuned!

This site uses Akismet to reduce spam. Learn how your comment data is processed.